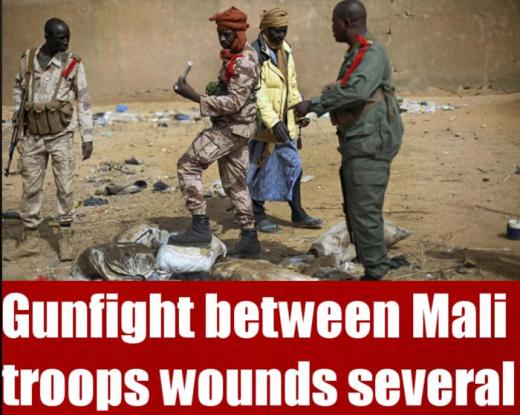 Soldiers from a unit allied with the leader of last year’s military coup in Mali have stormed the camp of the Red Beret presidential guard in the capital, witnesses say.

At least one person was reportedly killed and five others wounded in the attack in Bamako on Friday morning.

Malian soldiers gave up towns in northern Mali with hardly a fight last year to rebels, and then a military coup in the capital, led by Captain Amadou Haya Sanogo, disrupted the command system.

“Since 6am, the soldiers arrived in armoured cars and pickup trucks, all of them armed to the teeth to attack our base,” Batoma Dicko, a woman who lives in the camp, that includes housing for military families, said. “The women and children tried to stop them from entering the camp. They shot tear gas at us and started shooting volleys in the air.”

Amadou Diallo, a doctor who works at the infirmary in the camp, known as Djicoroni Para Camp, said there was at least one dead and five wounded.

“A young man in his 20s was hit by a bullet in the head and he died on the spot. The bullet pierced his face through his right cheekbone, and came out through his neck. He was totally disfigured. There are also two women who were wounded, and three children, aged 11, 17 and around 15 years old.”

The Red Berets were the elite presidential guard who protected former president Amadou Toumani Toure, who was toppled in a coup last March by junior officers. Green-bereted troops backed Sanogo, who seized power last year before turning power back over to civilians, and they were the ones who attacked the camp on Friday.

Soon after the coup, the camp has been attacked several times by the pro-coup soldiers. On earlier occasions, they disarmed the soldiers, and removed all of their artillery and ammunition.

Meanwhile, in northern Mali, a suicide bomber hit a checkpoint on Friday, killing only himself in the first known suicide bombing since French military forces intervened in the country

The suicide bombing happened in the city of Gao, which was occupied by armed rebels until French-led military forces pushed them out.

It was the first known suicide bombing in Mali since France started its military intervention on January 11.

Malian military spokesman Modibo Traore confirmed that a suicide bomber attacked a checkpoint at the entrance to Gao at around 6am local time. The bomber, who was wearing an explosive belt, was the only casualty.

Officials at a French military base in Gao declined to comment on the attack.