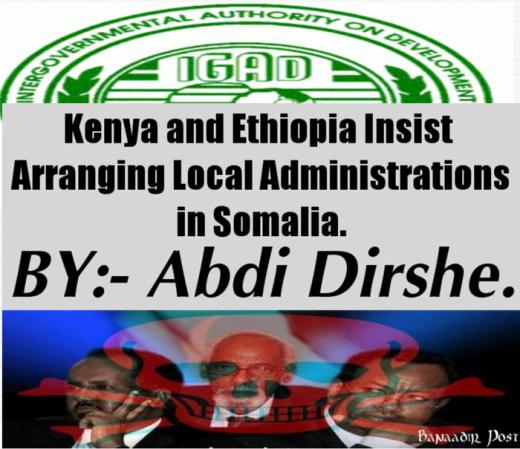 the Intergovernmental Authority on Development (IGAD), the regional organization for East African countries that include, among others, Kenya, Ethiopia and Somalia, has recently published an unsigned and troubling Memorandum of Understanding (MOU) which indicates that the new government of Somalia is allowing Kenya and Ethiopia to oversee the “political and administrative arrangements in South-central Somalia.” Ethiopia claims that this MOU was signed by a Somali General, Mohamed Sheikh Hassan, authorized by the Somali Prime Minister.

This unsigned MOU theoretically provides the legal platform for the securitization of all the Somali regions in the South without delineating the areas of jurisdiction, core operations and oversight. Furthermore, the MOU creates legal questions with respect to the operations of the troops under the African Union Mission in Somalia (AMISOM) as there is no reference about these forces in the document. The MOU supposedly legitimizes the escalation and presence of the Kenyan and Ethiopian troops and the involvement of the two countries in Somalia. Moreover, it is designed to undermine the leadership of the Somali President, Hassan Sheikh Mohamud as it gives no consideration to the sovereignty and territorial integrity of Somalia. Given that Kenya and Ethiopia have been and continue to be the destabilizing actors in Somalia, the Somali people believe that these countries intend to derail the new Somali government’s priority to stabilize and unite the country.

By claiming to be pursuing a fight against the extremist group inside Somalia known as Al-Shabaab, both countries have deployed their troops inside Somalia without any legal endorsement and insist on arranging local administrations in Somalia, thereby interfering in the political independence, sovereignty and territorial integrity of Somalia. Both countries receive political, military and economic assistance from the United States and its allies as they are convenient and effective allies in the “war against Al-Shabaab.” This opportune arrangement is not viewed favourably in Somalia.

Similarly, it should be noted that while the Special Representative of the Secretary General for Somalia, Mr. Mahiga has welcomed the MOU in an official statement and has underscored that Somalia was represented, no Somali government official has acknowledged that Somalia was represented at the alleged meeting that was held on December 06, 2012. This raises some concern about Mr. Mahiga’s position and as a result, the UN might find itself drawn into a diplomatic tag of war.

Dr. Weinstein explains the motives of Kenya and Ethiopia in his article, “Kenya’s Political Failure in Southern Somalia” as he notes that Kenya and Ethiopia have a grand design in mind for Somalia. He argues, by the time these two countries complete the plan, Southern Somalia will have three distinct “semi-autonomous states” that are ruled by “Somali clients.” Kenya is to establish the Jubbaland state by merging the three Somali regions close to its border, the Lower Jubba, Middle Jubba and Gedo. Ethiopia would impose its will on most of the central regions of Somalia. The AMISOM forces would establish the third “state”, Banadir region, along with Mogadishu and its surrounding areas. By creating these entities, Kenya and Ethiopia hope to create weak and unstable Somalia as they view a strong Somalia as a security threat.

However, the Somali people have shown earnest support for the Somali President, Hassan Sheikh Mohamud who has opposed the interference in the affairs of Somalia by Kenya and Ethiopia. His stance has drawn nasty diplomatic attacks from these governments and they may have resorted to political manipulation through the MOU that arguably authorizes them to implement their grand design of establishing “semi-autonomous states” thereby implicating that the new Somali government is their “client” in the eyes of the Somali people.

Kenya’s insistence that it should be allowed to complete its Jubbaland plan clearly violates the political independence and sovereignty of Somalia. However, the MOU has the objective to provide legal cover for Ethiopia and Kenya. Interestingly, it has no signature, making it suspect at best. The new Prime Minister of Ethiopia, Mr. Hailemariam has given few interviews regarding Somalia and strangely sends mixed messages, insisting on the need to have “inclusive process in Somalia”, while also sounding conciliatory towards Somalia, deferring matters related to Somalia to the Somali national government. However, this MOU underscores the need for Somalia to strengthen its political and diplomatic practices and negotiations and the necessity to assert itself on the domestic front.

The Somali people are nervously waiting for clarification regarding the MOU from the Somali government. One way or another, the arrangements outlined in the MOU will have enormous and lasting consequences on peace and security in the Horn of Africa.

ABDI DIRSHE IS A POLITICAL ANALYST AND IS ALSO THE CURRENT PRESIDENT OF THE SOMALI CANADIAN DIASPORA ALLIANCE. CONTACT ABDI AT a.dirshe@hotmail.com