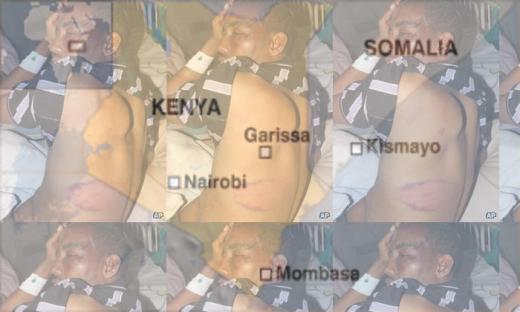 At least eight people have been shot and more than 50 wounded in an army crackdown in the north-eastern Kenyan town of Garissa, officials say.

A student told the BBC soldiers had shot at pupils waiting to go into an exam at a school near a military base.

It was the second day of violence after the killing of three soldiers by gunmen in town that borders Somalia, where Islamistmilitants are based.

Kenyan Defence Minister Mohammed Yusuf Haji has told the BBC he did not authorise the army action in Garissa, which is about 350km (215 miles) north-east of the capital Nairobi.

Dr Musa Mohammed, the medical superintendent of Garissa Provincial Hospital, told the BBC that following “skirmishes” on Monday, 45 patients were admitted – two of whom had gunshot wounds.

The hospital received another 15 casualties, including three boys, on Tuesday morning.

“Out of them six are gunshot injuries – they are undergoing treatment. Currently up to now nobody has been reported dead,” Dr Mohammed said.

The Kenya Red Cross Society (KRCS) said it had recorded that one person had died in the violence and that a blood donation area had been set up to help treat the wounded.

On Tuesday morning, the medial aid charity said in a statement that it had “rescued four males, four females and two children, eight of them being gunshot casualties”.

Soldiers are also reported to have gone into a school and shot at students.

Hussein Yarow Ali, the head boy at County High School, told the BBC soldiers came into the school at 0900.

“We were waiting exam, we heard a lot of tension from the students – after a few moments two students were injured,” he said.

“The one who was shot in the hand – he was in front of the class, he was just revising for the exam that he was waiting [for].”

Residents say Garissa has been like a ghost town on Tuesday, with all businesses and government offices closed and soldiers patrolling the streets.

There have been several recent attacks on Kenyan security personnel in Garissa, which have been blamed on the Somali militant group al-Shabab.

Garissa and nearby parts of Kenya are mainly populated by ethnic Somalis.

Kenya sent troops across the border last year to fight al-Shabab but its forces have since been merged with the African Union force in Somalia.

The military says the soldiers who were shot were part of the AU mission in Somalia.

They were killed as they fixed a puncture on their truck, and the gunmen escaped into the crowds of people who gathered after the shooting