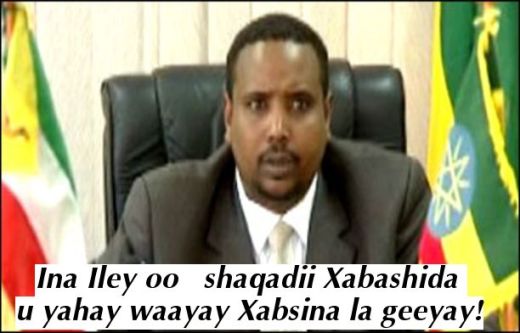 The Ethiopian federal government has sacked the president of the Somali regional state according to reports in the regional administrative capital Jigjiga.

The ouster of Abdi Mohamud Omar comes on the heels of growing local, regional and international accusations of widespread abuses in the region.

Mr Omar has been accused of torturing, killing and the disappearance of hundreds of Somali civilians in the restive region in eastern Ethiopia.

He is said to have been using the notorious and often lawless paramilitary Liyu Police and until recently no evidence of the abuses has reached the outside world. The Liyu police operate in the same manner as Sudan’s janjaweed militia who are said to be responsible for much of Darfur’s unrest.

Swedish Television released last month video evidence smuggled out of Ethiopia documenting and revealing gruesome human disaster of staggering proportions. Many villages in the Dagahbur district were leveled to the ground during 2010 operations.

This year the Liyu police also carried out summary detentions and execution of civilians in Gashaamo, Harshin and Baligubadle towns. Human right groups said, more than 50 civilians have been executed by the group led by Mr Omar.

The international court of justice has not so far issued a warrant for his arrest for his roles to known and well documented abuses despite new evidences.

According to reports in the region, the Ethiopian government equally plans to scrap up the Liyu Police militia and replace them with the regular federal army.

The exact motives behind the sacking of the Somali State premier is not clear but he was recently summed up to Addis Ababa.

The Ethiopian government fears the growing anger over Abdi’s rule and his militia might further fuel reprisals and help create new armed groups in the conflict-ridden region. Since his appointment the conflict spread into new regions that was relatively stable prier to his appointment two years ago.

This is some what a damage control for the government under its new leadership. No one has been appointed so far but his deputy, Abdifatah Mohamud Hassan is the acting state regional president.

All the leaders of the region has been ousted by Addis Ababa even before completing their terms unlike the other federal states in Ethiopia.

The latest effort to bring the government and the rebel ONLF group to a round table collapsed last week in the Kenyan capital. The Ogaden group accused Addis Ababa of blocking negotiations by urging them to accept the Ethiopian federal constitution as precondition for further mediation.

Bordering Somalia and Somaliland, the Somali regional state is one of nine federal states in Ethiopia and is mainly inhabited by ethnic Somalis.

The footage below shows Abdi Mohamud Omar visiting villages where hundreds have gone missing just hours before and after his visit. People who spoke against his crimes have disappeared all together and relatives of the missing civilians have urged the international community to arrest Mr Omar. They say they deserve justices and their voice should be listened to like the people of Libya, Syria and South Sudan who for many years lived under repressive regimes.