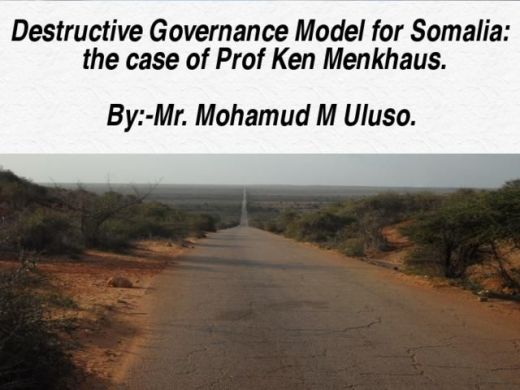 Immediately after the imposition of the Provisional Constitution (PC) establishing a medieval model of governance in Somalia, Prof Ken Menkhaus, scholar and UN/US government advisor on Somalia, has published an article under the title, Somalia’s 20-year Experiment in Hybrid Governance in World Politics Review and in the Somali Websites. The article offers theoretical justification for the adoption of what the author termed the ‘Mediated State’ Model of governance in which the central government outsources its core functions to the private sector, nonprofit organizations and local polities. This model of governance embedded in the PC assumes the existence of legitimate and accountable local political authorities either interested in or obliged to cooperate with the national leaders and institutions. Thus, the leaders of the central government without responsibilities and competencies must gain legitimacy, functions and authority from those local authorities.

Prof Menkhaus who has been musing on Somalia’s dystopian future for the past 20 years dispels the perception that there will be a functional government in Somalia after August 20, 2012. He considers the efforts devoted to establishing a Central Government fruitless. And finally, he admits that the ‘Mediated State’ model is not amenable to donor aid programs.

As an example of the aptness of the ‘Mediated State’ Model for fragile states (Somalia), Prof Menkhaus refers to the Wajir case study titled (The rise of a mediated state in northern Kenya: the Wajir story and its implications for state building). But it seems tenuous if not a stretch to make the Wajir story- the security and development experience of small community- a model for rebuilding the collapsed State of Somalia. The motivations of the Wajir community and the indifference of the Kenyan Government to the insecurity  in the Somali-inhabited areas could have different explanations including the dictatorial system, corruption, and the deliberate politics of divide and rule, etc. In the years 1992-2002, the Kenyan government had sufficient coercive power and resources to quell any security disturbance in any part of Kenya. In Somalia, local government laws contained provisions guaranteeing the participation of traditional and civic leaders in the security, development and  political activities of the regions and districts. But the dictatorship made public participation meaningless. Anyway, that kinds of local experiences should not be elevated as a model to state-building in Somalia. It is ironic to see donors rush to prevent at any cost the falling apart of the Ethiopia state at any critical moment while Somalis are exhorted to drift apart.

Prof Menkhaus is not alone in the efforts to  prescribe a primordial model of governance for Somalia. Specifically, the imposition of the PC and the formation of symbolic Federal Government (FG) is the practical implementation of the theoretical political framework articulated by a host of American and European scholars and institutions. The list of scholars includes Matt Bryden (New Hope for Somalia? The Building Block Approach), John Yoo (Fixing Failed States), Richard Dowden (Don’t force statehood on Somalia), Bronwyn E. Bruton (Somalia A New Approach), Peter Haldèn  (Somalia: Failed State or Nascent States-System?),  Prof Ken Menkhaus (Governance without Government in Somalia: Spoilers, State Building, and the Politics of Coping). The institutions include Chatham House (Somalia’s Transition: What Role for Sub-National Entities?) and the Berghof Research Center for Constructive Conflict Management , which published the article titled “On Hybrid Political Orders and Emerging States: State Formation in the context of “Fragility” written by Volker Boege, Anne Brown, Kevin Clements and Anna Nolan.

Also, in 1995, the European Union funded a study project co-chaired by Prof Ioan M Lewis and James Mayall who issued a document titled, “A study of decentralized political structure of Somalia: A Menu of Options,” In 1998, the Ethiopian Foreign Ministry drafted a policy paper for the conceptualization and implementation of a “clan based building blocks strategy” for Somalia. Despite the widely documented criticisms (debunking),  if not outright rejection of clan federalism by the majority of Somalis, foreign powers spearheading federalism went ahead with the imposition of a federal system- a harbinger of national conflict.

Nation building opponents, theorists of “wicked problem” concept in political science, revisionists of Westphalian nation-state sovereignty for fragile (failed, weakened, collapsed) States, war on terror pundits and profiteers, donor bureaucrats, and historically rival neighbors ( Ethiopia and Kenya) have targeted Somalia to seriously debilitate rather than rehabilitate. These groups would use Somalia as a laboratory experiment or as a site for looting foreign aid. They have developed brilliant narratives that have obfuscated the flaws and superficiality of the perfunctory international efforts to help Somalia.

In his paper on State Fragility as a Wicked Problem, Prof Ken Menkhaus argues that  Somalia classified as a “wicked problem” rather than “tame problem” defies what he called the traditional state building  policy prescriptions. Thus, behind closed doors Somalia is viewed and dealt as dystopian society that requires new doctrine and policy prescriptions developed by the external powers.

As an illustration, the International Crisis Group (ICG) published a critical policy briefing statement titled- “Somalia: from Troubled Transition to a Tarnished Transition?” that analyzed the harmful consequences of the UN controlled process for ending the transition period. In its quick response, “UNPOS response to ICG article on Somali Transition,” the United Nations Political Office (UNPOS) did not deny the criticisms and argued that Somali politics are complicated and fractious and that the process has been difficult and has and will continue deeply flawed in many ways. This reveals the decidedly destructive judgment of the donor bureaucrats on Somalia.

In August 2008, Hiiraan Online- a top and influential Somali Website- published an editorial, critical of bottom up rule titled  From Statehood to Primordial City States in response to an article published by the New York Times: Anarchy-cursed Nation looks at bottom up rule. The emphasis on the bottom-up approach is to obstruct state-building in Somalia. One of the recycled myths is that the political processes in Somaliland and Puntland were bottom-up approach while in reality the processes in both local entities were top-down approaches in their context. Somaliland and Puntland have yet to implement devolution of power to local governments.. Therefore, the debate over the bottom-up versus top-down approaches is deceptive. Somalia needs both approaches simultaneously. The focus should remain on the complementarities of the governance structures at all levels, public consensus and awareness of state building agenda, and resource availability.

The above mentioned scholars share the view that the Somali people are unable to understand and practice the value system behind the Westphalian nation-state concept, which constitutes the foundation of the international norms of economic cooperation, foreign aid and diplomatic relations. As a consequence, they hold that the Somali State should be be allowed to disintegrate and be replaced with a medieval system of governance with varying names: community based development system of governance, development without regard to governance, nascent-states system or mediated state governance all without sovereignty. Now, in the presumption that Somalis lack political sophistication, it’s hard to fathom the Somali ability to understand the suggested messy state formation process based on what has been called ‘Mediated State’ of governance.

Prof Menkhaus and others did not explore sufficiently the profound effect of external influence and interventions in Somalia. The ‘Mediated State’ is a destructive governance model, which institutionalizes political fragmentation and probably will hinder the emergence of effective national government with capacity to address governance needs.

The Somali people should be very much concerned about the decisions and actions of the new political leadership and a parliament populated by individuals accused of corruption and with questionable loyalty. Already the seeds of fresh conflicts have been planted among Somalis, and the new parliamentary leadership has been booby trapped. The improper travel of former parliament speaker, Mr. Sharif Hassan Sheikh Adan to Kenya and United Arab Emirates for discussions with foreign leaders- allegedly about rigging the outcome of the presidential election- has shattered public confidence in and enthusiasm for the new parliament as well as the credibility of the whole political process. In addition, the new parliament hijacked by the international community, has been ordered to elect quickly new president who without proper preparation should attend on September26 inNew York an international conference on Somalia.

The hijacking of national institutions by the international community is the beginning of FG failure. To prevent a dystopian future for Somalia , it is urgently needed to create and  activate a Somali Transparency and Accountability Society (STAS) for the protection and defense of Somalia.

In the 21st century, Somalia needs a democratic functional national authority accountable first and foremost to its people, not only willing but demonstrably capable of representing national interests and empowered to deliver the critical functions of government. The only way this kind of government can be established in Somalia is to fulfill the five points plan proposed by the Turkish Government during the Istanbul II Conference-Turkey pushes for united Somalia and to adhere to the principles laid out by Ashraf Ghani and Clare Lockhart in their book on “Fixing the Failed States- a Framework for Rebuilding a Fractured World (2008).”